Artax Propulsion System is a craftable tool on Talos I during Prey (2017) and on Pytheas during Prey: Mooncrash.

Artax Propulsion System is a zero g propulsion device that lets Morgan explore the space outside the station. The device can be crafted at any Fabricator on the station.

The Artax Propulsion System’s main use is as a means of propulsion in zero-g environments. It allows the wearer to effectively fly in these locations, offering a full three-dimensional range of movement and the ability to rotate “upside-down”.

The Artax Propulsion System also features a boost ability (the jet pack equivalent of sprinting) which can be used at full speed in any horizontal direction (the ascend/descend functions don’t benefit from this). However, care should be taken when boosting, as high-speed collisions with large objects and surfaces will damage Morgan.

It also has value in normal-gravity zones: it can break a dangerous fall, and can be used to “glide” across gaps which would otherwise be too wide to jump.

The APS has two possible upgrades. The ARTX Propulsion Gen 1 chipset increases the APS’s glide speed and duration in normal-g, and raises its maximum boost speed in zero-g; and the Gen 2 upgrade adds a jet boost ability to it, which increases the initial upward thrust in normal-g areas.

The Artax Propulsion System is quite valuable when exploring the Crater of the Moon base of Pytheas, since it enables its user, when combined with the low gravity, to jump from rock to rock, thus avoiding to walk on the regolith and to alert the Moon Sharks of their presence. Vijay Bhatia has an Artax Propulsion System in his default equipment. All other characters embodied by Peter must either find it or craft it (if the plan has been found). 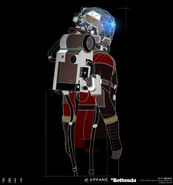