Auto-Cannon is a cannon-type weapon gained from Centurion in level Sacrifices during the events of Prey.

Tommy gains this weapon by dismembering one of Centurion arms. Its a rapid-fire, multi-barrel machine gun, complemented by an organic flak grenade launcher. Grenades explode on impact. Note, that prolonged use of the primary fire will make the gun overheat and require some time to cool off the barrels.

The weapon is good when facing tough enemies or large group of weaker enemies. 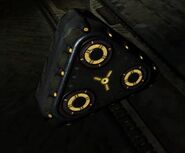