The Crew Quarters are the primary living quarters for all staff aboard Talos I. Depending on their importance on the station, staff were assigned either a luxury suite, a crew cabin, or a habitation pod.

The Crew Quarters were also a location for employees to relax, containing a movie theater, a specialized mixed recreation center, a bar, and even a pool. Employees and guests enjoyed the cooking of executive chef William Mitchell in the cafeteria, as well as personal training with Emma Beatty in the fitness center.

The Crew Quarters are furnished with an abundance of luxury materials, such as wood and leather - items not commonly expected aboard a space station. This is another sign of the wealth of TranStar and another measure to counteract the long-term stress amongst personnel caused their long-term stay in space.

Many of the station's crew members were trapped here during the Outbreak, as 19 human survivors can be found here. However, all but 1 of these are under the mind control of a Telepath. The mind-controlled survivors are separated into two groups, in the Cafeteria and Fitness Center, with each group having a Telepath stationed there.

A total of 49 missing TranStar crew can be found here, the largest amount out of any other location aboard Talos I:

Concept art for the cafeteria sculpture. 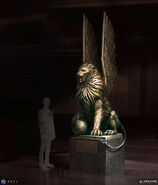 Concept art for the winged lion statue, seen in this hub.

The cafeteria.
Community content is available under CC-BY-SA unless otherwise noted.
Advertisement