The Gelifoam Lattice Organism Obstructor, or GLOO Cannon for short, is a tool found on Talos I during Prey (2017) and Pytheas during Prey: Mooncrash.

The GLOO Cannon is a versatile tool which shoots gelifoam, a quickly hardening, flame retardant, non-conductive, glue-like foam that expands as it hardens. Each GLOO canister it uses as ammunition contains 42 compressed balls of gelifoam.

The tool can be used for trapping foes where they stand, covering exposed flaming pipes and surging electrical boxes, or providing an interesting new path. Like the Huntress Boltcaster, the GLOO Cannon does not deal damage and will not kill enemies other than Cystoids, although a security officer in Talos I Life Support has apparently committed suicide with one by aiming it at her head and firing a shot.

The GLOO Cannon is a "non-standard tech weapon" and therefore requires Lab Tech I and II neuromods to fully upgrade with weapon upgrade kits. "Incapacitation rate" refers to the number of hits required to fully immobilize a target (in other words, it is the equivalent of damage) while "handling" is the percentage of normal walking speed Morgan moves at while firing the GLOO Cannon.

On Pytheas, standard GLOO cannons are more effective than the basic stock ones, and can be found in various locations, as can their fabrication plans. Their background color in the inventory is green, and their built-in upgrades are randomized.

On Pytheas, advanced GLOO cannons are more effective than the standard ones, and can be found in various locations, as can their fabrication plans. Their background color in the inventory is blue, and their built-in upgrades are randomized.

The GLOO Cannon is extremely versatile despite dealing no damage. Its most obvious use is immobilizing hostiles for combat purposes or for scanning with the Psychoscope. The number of hits required to immobilize an enemy, how incapacitated the enemy becomes and how long it is incapacitated for depend on how large it is: a Mimic will be frozen entirely after a few shots, while a Phantom takes many shots and will still be able to finish any ranged attack it started before being hit. Enemies encased in GLOO take bonus damage, especially from the Wrench.

The device also has a lot of utility in simply getting around the station. Morgan can climb on GLOO "splats" easily using the ledge grab mechanic and paths can easily created either diagonally up walls or alternating sides of a shaft to reach inaccessible areas. GLOO can also extinguish most fires (though it will "pop" after a while if the fires are being caused by a burning gas line), plug holes in gas lines, temporarily stop electrical discharges from broken equipment, and seal breaches in the hull of Talos I. GLOO is also non-conductive and so can be used to create safe bridges over electrified floors.

It can also be used to create short-lived makeshift barriers to block doors or impede the path of smaller Typhon such as mimics, or in front of cystoids that will either be trapped or will detonate on the GLOO bubble, killing themselves in the process.

An important note is that GLOO splats will not adhere to glass or other GLOO splats since gelifoam is vitreophobic, and will reflect off of vitreous surfaces and adhere to and expand on the next surface it touches.

The main Achilles' heel of the GLOO Cannon is reloading speed, which by default is very low. This is made even worse, once the animation has started, the player is not able to switch weapons until it has concluded, and so upgrading it should be made a priority. Handling can be improved via weapon upgrade kits and the "Heavy Gear Optimizer CRU" chipset.

As it contains electronics, the GLOO Cannon, like the Q-Beam and disruptor stun gun, is temporarily disabled by any attack that deals electrical elemental damage, including arcs from damaged equipment and the ranged attacks of the Voltaic Phantom and Technopath. 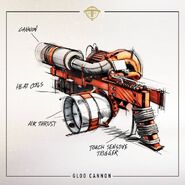 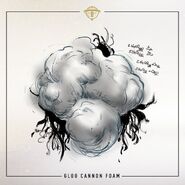