The Bullfrog 256-S Harvester class Operator is a type of operator in Prey: Mooncrash.

Unlike other operators, the Harvester does not directly interact with the player, nor can they be used to replenish the player's current status. Instead, they passively wander around areas - mostly area with regolith - and vacuum it, using a built-in recycler to process whatever it grabs into materials for fabrication. This same vacuum can also pull the player in and recycle them by accident, so make sure not to get in its way while its vacuum is active.

Harvesters usually produce a warning klaxon when the player is close to them. They can also be reluctant to use their vacuum in this circumstance, but may still do so occasionally. They are powered by a Control Module, much like Pytheas' main systems. Because of this, it can sometimes be prudent to destroy the Harvesters and take their Control Module, if such an alternative like buying or fabricating one isn't possible at the time. Harvesters will always have a Control Module when destroyed, as well as some materials already recycled. There will also be some Spare Parts that only Joan Winslow can acquire while Dismantle is installed via Neuromods.

Another difference that segregates it from operators is that if attacked sufficiently enough, it may become hostile and use its vacuum as a defensive measure to deal with attackers. One of the similarities it shares with operators is that it can be corrupted by a Technopath. In this state, it will openly chase the player if spotted, and attempt to vacuum them up while chasing. A Corrupted Harvester can be noticed from afar, as it will erratically jolt and tilt while moving.

As firm believers in worker safety, TranStar's Bullfrog 256-S Regolith Harvester is built to work under hazardous circumstances so a person doesn't have to. The Harvester's heavily reinforced DuraGRADE exterior is designed to withstand everything from enar molten heat to the cold vacuum of space while making extensive use of patented Recycler tech to quickly sift through lunar regolith and excavation site rubble for valuable resources.

Temperamental. If you so much as give them some side-eye, they'll turn on you. Heavily armored, but I think I spotted an exposed panel on their ass.

Also unlike other operators, the Harvester does not consist of a trapezoid body with robotic arms attached to it. Instead, it is a large vehicle vaguely resembling a Hovertank. Its front body is a brown-orange - akin to the colour of Engineering Operators - with electronics and other circuitry on its back that glows blue. It has a yellow light to resemble its lens, unlike operators that normally use a blue light. The front body is armoured, allowing it to shrug off small arms fire, and even electrical discharges from the Disruptor Stun Gun. This opens up when the Harvester is using its vacuum.

Since the front of the Harvester is armoured, attacking it head on will be outright pointless and a waste of ammo and/or energy. If it's chasing you and you can't get around it, use an EMP Charge or the Disruptor Stun Gun. This will disable it and allow you to get around to its back. Once you're shooting into its back, it's much weaker and easier to destroy. A Shotgun works best for this, especially if you can get a sneak attack.

The Harvester is vulnerable to explosives. Setting one behind it may destroy it in one go. Alternatively, if it's chasing you while vacuuming, corrupt or not, try and find an explosive canister lying around and throw that into its chute. This will also outright destroy it from the inside out.

A Q-Beam can work against the Harvester, but due to how slow you move while using it, it can also be risky to use, if it is using its vacuum. As a result, it's best advised to use it as a means of finishing off the Harvester, rather than a form of attack. 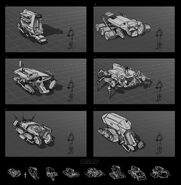