"What the fuck are those things?"

– Tommy after seeing Hunters for the first time. [src]

Hunters are enemies appearing on Sphere during the events of Prey.

Hunters are the foot-soldiers of the invading force, it is their responsibility to track down and eliminate any captives that get loose. They are armed with the standard Rifle, and will use both firing modes, depending on how far away they are from Tommy. They can understand and speak English. The majority of the enemies faced in Prey are Hunters.

Hunters appears briefly at the start of the game. From that point they become the main enemies which Tommy needs to fight.

Hunters are two legged reptilian creatures. They posses four yellow glowing eyes and are in full body armor. They seem to have some sort of intelligence as they are capable to communicate with each other and use various technology on Sphere. 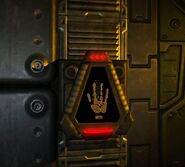 Hand scanner for a Hunter's hand