View source
watch 01:36
We're Getting Mutants in the MCU - The Loop
Do you like this video?
Play Sound

"The people that come after us will be smarter, stronger, immortal. They can judge us if they want, but they'll know they exist because of the things we did."

VP, Director of Research at TranStar

Doctor Morgan Yu is the vice president and Director of Research of TranStar Industries and the player character of the 2017 Prey as well as Prey: TranStar VR. The player can choose Morgan's gender at the start of Prey.

Morgan Yu was born on May 5, 2005, as the second child of Catherine Yu, a German businesswoman, and William Yu, an accomplished Chinese neuroscientist. Their older brother is Alex Yu. In 2027, after they graduated from the Periot College School of Science with a Doctor of Science degree in neuroscience, Morgan was employed by TranStar Industries, their parents' company, in the testing of an experimental device known as a Neuromod. In 2032, Morgan was transferred to TranStar's orbital space station, where over the course of the next three years they would be instrumental in the invention of the Psychoscope.

Morgan volunteered to be the main test subject in the experiments to grant humans Typhon abilities, fully aware that as part of the trials their memories would be erased over and over again as the Neuromods were installed and then removed. Towards this end, Morgan was placed in a simulation of their apartment while they were still on Earth and made to relive the same day of their life over and over again.

Subsequent removal and adding of various Neuromods showed a previously unknown side effect of personality drift as well as slowly influencing various portions of their mind in different directions. This caused Morgan's personality to completely change in a way that their previous opinions were wiped away and was left mentally unstable, resulting in violent outbursts.

At some point in time, Morgan figured out what was happening and escaped, but foreseeing that they would be captured again, they reprogrammed an Operator named January to help the future amnesiac self by planting Neuromods that would be able to help Morgan fight their way out of the station and telling them what they have forgotten due to the removal of Neuromods. However, Morgan was eventually recaptured and had their memory erased again. Morgan's main goal at this point in time would be to destroy Talos I, and with it the Typhon and the threat they presented to the human race.

Morgan wakes up in what seems to be an apartment on Earth in San Francisco. They are contacted by their brother, Alex Yu, who tells them that they need to travel to the TranStar building. They put on their TranStar uniform and are taken to to the TranStar building by helicopter. They meet their brother and partake in a series of tests until a Mimic takes the form of Dr. Bellamy's coffee cup and begins to attack the scientists. The staff use a gas to sedate Morgan, who is knocked out.

Morgan wakes up once again in their apartment and are contacted via email by a Science Operator called January. It tells Morgan that they need to escape from their apartment. In doing so, they find themselves in a lab and learn that the "apartment," the helicopter and the lab was just a series of carefully disguised sets, designed to make them believe that they were still on Earth. As Morgan escapes from the lab, they witness and battle against Mimics and Phantoms. They learn that they are on a space station, Talos I, which is owned by TranStar.

January makes contact with Morgan and leads them back to their office, granting them access to more Neuromods and a video where a past version of Morgan explains part of the situation, before being abruptly cut off by their brother Alex Yu. After being cut off they go to find Dr. Calvino's office to restore the connection to the Looking Glass servers which Alex had cut them off from.

Upon returning to their office and resuming the video, Morgan is informed by their past self that they must destroy Talos I, stating that nothing can be allowed to survive, including themselves and all research, to ensure the Typhon never reach Earth, informing them of their former plan to destroy Talos I using a pair of arming keys to detonate the station's reactor. Morgan thus embarks on a journey throughout the station in order to reach Deep Storage and access their own arming key, fighting the Typhon and dealing with survivors they encounter along the way.

After the credits (skipping them will not skip what follows) gameplay resumes in a "Secret Office." As long as the player did not choose to end the game by using Alex Yu's escape pod, they will be faced by Alex Yu and Operator versions of four other characters, Dayo Igwe, Mikhaila Ilyushin, Sarah Elazar and Danielle Sho, which the player had the option to interact with in various ways during the course of the game. It is revealed at this point that the player character is in fact not Morgan, but instead a special type of Typhon that has essentially been neuromodded in reverse, imposing human-like empathy on a Typhon brain. Alex shows this creature that Earth is now filled with Coral, explaining that humanity has spent years using Typhon-based upgrades, but that they never considered putting human traits into a Typhon, apparently the reason why they created the hybrid test subject - a Typhon organism with cells from Morgan, a human - with the hopes of finding out if it possessed such traits as empathy using a "complex simulation" based on a reconstruction of Morgan Yu's memories.

The real Morgan is implied to be long dead. At this point the simulation will be ruled to be either a failure or success based on the player's actions. If it is a failure (due to overwhelmingly "evil" actions), the scene will simply end there with the Mikhaila Operator declaring they need to "start over." Presumably, this would indicate that multiple Morgan-Typhon creatures were made for testing.

If a success, the player will be given a final choice. They may either take Alex Yu's hand, at which point the dark hand of the Typhon will take on a human appearance, confirming their hopes that the hybrid would be able to empathize and relate to ("see") humans, or "kill them all", which will result in the dark Typhon-hand forming a sharp tentacle, which will then impale and kill Alex Yu, while all of the Operators are destroyed by a blast of power and fall to the ground.

If the player instead chose to use Alex Yu's escape pod to leave the station on their own, they will only receive a short game over sequence showing a computer interface, with Alex declaring in the background "we failed, this isn't the one" and the Mikhaila Operator saying to start over.

Morgan is a highly intelligent and resourceful person, being able to hack various devices on Talos I and even reprogram an Operator for their needs before their neuromod tests began. Presuming apto-regressive neurotomy does not remove non-declarative memory, Morgan also seems adept in using various tools and weapons, including experimental technology like a GLOO Cannon. Morgan invented the Psychoscope, and contributed to various other projects in Psychotronics, even overseeing live Volunteer testing. Morgan used to be quite cold and professional, distancing themselves from the subjects they experimented on.

Morgan retrieving his suit in the reveal trailer.

Morgan losing himself in the reveal trailer.

Morgan checking his bloodshot eye in the reveal trailer.

"Good morning, Morgan. You're not going to like what I have to say next."

A-pose shots of the highly detailed 3D Morgan model made exclusively for the reveal trailer.

Close-up of his face. 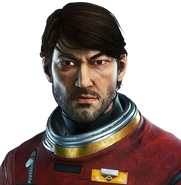 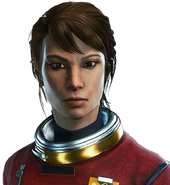 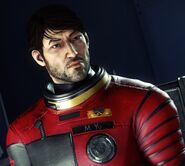 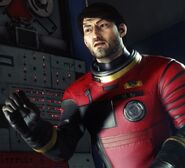 Morgan as seen in the launch trailer. 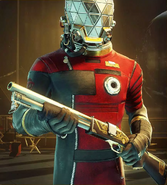 Male Morgan sharing a glass with Will Mitchell.

Photo of Morgan with Alex in a newspaper article. 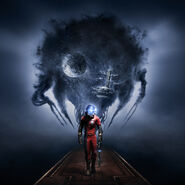 Morgan in the Point of Origin key art.

Close-up of Morgan in the Point of Origin key art.

Morgan in the Fight the Invasion key art. 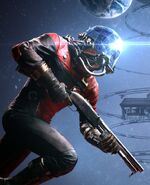 Close-up of Morgan in the Fight the Invasion key art.

Morgan in the Mirror key art.

Close-up of Morgan in the Mirror key art. 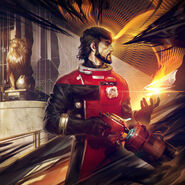 Close up of Male Morgan in the Gameinformer key art. 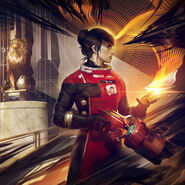 Close up of Female Morgan in the Gameinformer key art. 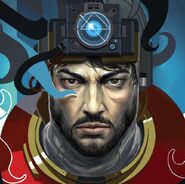 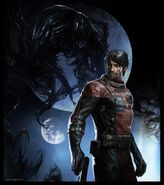 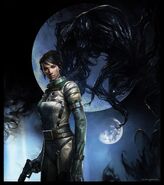 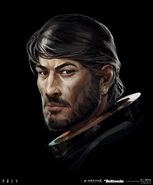 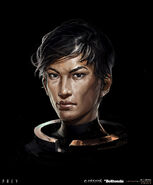 Morgan working on an Operator in a storyboard.