"The Psychoscope was a breakthrough. Apart from Neuromods, it's the most important tech on Talos I. "

The Psychoscope is a piece of technology invented by Morgan Yu to facilitate studying typhon organisms' exotic neural maps and thus unlock the secrets to their unique abilities. Just as the skill recorder in the Neuromod Division allows human connectomes to be scanned, digitized, and shared with other organisms via neuromods, the psychoscope records Typhon's ability-related neural activation patterns, uploads them to the servers, and allows them to be unlocked, downloaded, and installed via neuromods.

Material Cost (can only be fabricated in Prey: Mooncrash):

The Psychoscope is a helmet-like contraption which mounts a single-tube sensor with twin eyepieces, which can slide down to cover the user's eyes or push up onto their forehead when not in use. From the user's perspective, when the device is in operating position they see through a circular lens with a number of small spikes constantly moving around the perimeter, with laser-like lines forming between them. The system tags scanned targets and provides data regarding their identity, strengths and weaknesses.

The Psychoscope replaces the zoom function that Morgan previously had access to: using the zoom button after acquiring it will instead bring up the psychoscope overlay. As long as Morgan is wearing the psychoscope, any entity that they encounter and have not yet fully studied is scanned and data on them is added to a research database. Only living creatures and intact robots can be scanned. Once enough data has been accumulated for a specific organism, a new alien-type neuromod ability is unlocked.

The psychoscope also has its own series of chipsets which mostly focus on improving psi powers or providing elemental resistances, though there are some other useful abilities such as being able to detect mimics while they are still disguised and improving the psychoscope's scan speed.

Equipping the psychoscope does have the disadvantage of disabling access to the weapon wheel, since the control to pull it up is used to zoom the psychoscope in and out. it also prevents the use of the flashlight, though the psychoscope has its own night-vision-like effect to compensate for this. In addition, by default the psychoscope cannot detect concealed mimics or poltergeists that are not currently attacking.

Psychoscopes also shield their users from telepaths' mind-control abilities; Trevor Young's failure to wear one in Psychotronics resulted in his succumbing to a telepath's control (and, according to the developers, being the cause of the typhon outbreak that sets up the game). Whether or not Morgan intended psychoscopes to provide this mental shield is unknown. However, it can be noted that the doors to the main lab do not open to anyone unless they are in possession of a psychoscope. This and the presence of additional signage around the entrance to the lab insisting on the importance of wearing a psychoscope, suggest that the mental shield capabilities were deemed important enough to incorporate into the lab's security.

In Prey (2017), the psychoscope is first found on a corpse in the lowest level of Psychotronics. It is required to enter the main lab area.

In Mooncrash, Riley Yu's psychoscope can be first be found in her office in Pytheas Labs, and can be fabricated afterwards. 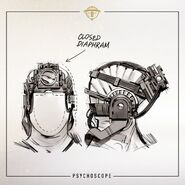