Pytheas Administrator
Riley Yu is a member of the Yu family and chief administrator of the Pytheas moonbase during Prey (2017) and Mooncrash.

Riley Yu is a cousin to Alex and Morgan Yu. She graduated from Mikeal-Launders University with a Master's Degree in Computer Sciences. She gained her position as Pytheas administrator due to her family connections, but she was ruthless enough and brought enough results to let her keep the position.

At one point during her tenure, Riley learned that Claire Whitten was a KASMA spy and ordered Vijay Bhatia to deal with her.

At some early point in the outbreak, Riley discussed the test-firing of the Typhon Towers in the Crater with Noel Benson. When he was killed mid-message, Riley set off to manually fire up the towers to help stop the outbreak.

Personality-wise, Riley appears to be very strict, cold and business-like, almost to the point of purposely intimidating all her employees. When welcoming newcomers on Pytheas, she calmly but directly warned them that they could die on the base, although she insisted that it was worth it.

She holds herself in high esteem, and demands to be known as either "Doctor Yu" or "Madame Director."

Riley has a normal amount of health (100 HP) and a slightly lowered PSI capacity (75 PSI). She has several stealth abilities and psychic powers such as Psychoshock, Mimic, and Phantom Genesis. Riley's default starting loadout consists of a Psi Hypo and a Psychoscope.

Riley is the only one of the five characters incarnated by Peter who is able to perform Necropsy on Typhon corpses.

Riley is not available for character selection at the beginning of the game. Her body must be encountered and her Pyschoscope must be reclaimed before she is selected. She can be found in her office at the top of the Pytheas Lab. 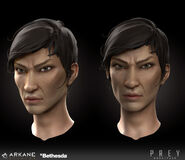