The Throne S4 Tactical Combat Shotgun is a pump-action close-quarters weapon found on the Talos I orbital research station during the gameplay of Prey (2017) and on Pytheas station during Prey: Mooncrash.

The S4 is a standard pump-action shotgun with a tube magazine that holds 4 rounds if stock, 10 rounds if fully upgraded. There's really nothing special about it. The only futuristic feature is the ammunition counter on the side.

The Throne S4 is a security weapon and therefore can only be fully upgraded via Weapon Upgrade Kits with the Gunsmith I and II Neuromods. On Pytheas, which lacks upgrade kits or their fabrication plans, Shotguns above Stock-grade will have randomized upgrades built into them.

Firepower stats in the table above reference the base values, following multipliers apply:

The Margrave is a special Shotgun only available through the Cosmonaut Pack DLC. The only difference is cosmetic. The Margrave is then found in the large, normally-empty grey cabinet in Morgan's office.

Shotguns on Pytheas, like most other weapons, are divided up by a rarity level system of Stock (white), Standard (green), Advanced (blue) and Elite (gold). The level of rarity determines the number of randomized upgrades the weapon receives: Stock gets 0, Standard 4, Advanced 9, and Elite 13. All but Stock Shotguns can also spawn with elemental effects which will give their shots fire, electrical, corrosive or psi-nullifying capabilities, with the chance seemingly increased depending on their rarity level. Another possibility is they will spawn "fortified" with a maximum durability of 150%.

The shotgun is useful when confronting enemies in small spaces or when facing a tough opponent. Unless a swarm of weak enemies are encountered, it is typically better to reserve shotgun ammo for larger threats like the Phantom and use the wrench or pistol on smaller threats like the Mimic. The shotgun deals very high damage at close range but suffers from a rapid damage fall-off at longer ranges.

A useful combination when using the shotgun against a threat like a Phantom is to immobilize the enemy with the GLOO Cannon and then enter close range to deal maximum damage with the shotgun.

Shotgun ammunition is rarer than pistol ammunition and more expensive to manufacture with a Fabricator. As a result, it can be rather difficult to keep the shotgun supplied with enough ammo to use it as a main weapon, and it is best saved for more powerful enemies. Shotgun shells take up one inventory slot for every 48 rounds carried.

The shotgun can be an extremely powerful weapon when fully upgraded and the Firearms I and II neuromods are installed. This brings the firepower all the way up to 98, allowing it to kill most enemies within three shots in most cases; if a critical hit is dealt it can even bring down the Nightmare in just 2-3 shots at close range on normal difficulty.

In Mooncrash the ability to purchase shells for the Shotgun with Simulation Points prior to actually entering the game means that it can easily become the player's standard weapon. The ability to have elemental effects can even make it a viable alternative to having the Typhon powers that normally give those effects: this is particularly useful for Vijay Bhatia who lacks any ability to unlock Typhon Neuromods. The elemental Shotguns are, however, not nearly as powerful as their Typhon power equivalents as their elemental damage is applied as an addition to the Shotgun's damage (for example, +10 fire damage) while in comparison Superthermal inflicts all of its damage as fire-elemental. 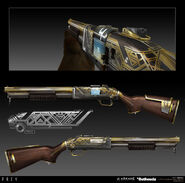