"The 8th Wonder of the World is in Space."

Talos I is an advanced space station and laboratory orbiting the moon in the year 2035, and is the primary location for the events of Prey (2017).

Talos I is composed of different sections which were built over the years since the Kletka Program in the 60s. They differ in both design and utility, being used for research, production, logistics or crew services. Retrofuturism and Art Deco are the most prominent style of decor on the station. Tape reel computers and similar outdated technology is still located in the station but they have since been refurbished to fit modern standards or have been cleaned up to act as decoration.

The station itself was anchored around the Kletka Containment Unit, before being expanded first vertically and then horizontally with modular decks. In its final form, Talos I is composed of three levels, each with an Escape Pod Bay and with a deck or sector connected to a lift in parallel to an utility system. The station is overall composed of:

In 1958, the Soviet Union launched the Vorona-1 Satellite, which entered orbit at LaGrange Point-Two between the Earth and the Moon. Following a communications failure from the satellite, the heads of the Soviet space program sent several cosmonauts to investigate. There, they encountered hostile non-terrestrial life forms which proceeded to kill the cosmonauts. The Vorona 1 was scuttled, and the footage of the incident was labeled a state secret and buried.

In 1963, Soviet Premier Nikita Khrushchev announced a program of cooperation with American President John F. Kennedy to contain the non-terrestrials, which were labeled Typhon. This resulted in the Kletka Program, which saw the United States and the Soviet Union build a space station around the Typhon organisms in order to research and contain them. However, a failed assassination attempt in Dallas, Texas would convince Kennedy to take over the Kletka program, cutting out the Soviets. In the decades that followed, the Americans would expand the station as a research and development facility, in order to gain insight into the Typhon organisms. Much of this was undertaken as part of Project Axiom, and the United States maintained the space station until the disastrous Pobeg Incident of 1980, when several Typhon breached containment and killed a research team. The fallout from this tragedy, coupled with further budget cuts to the US space program under the Reagan administration, saw the station go abandoned.

In 2030, the TranStar Corporation managed to assume ownership of the derelict space station, and began converting it into a high-end information technology and research and development facility, rechristened as Talos I. While ostensibly a corporate center and laboratory, the true mission of TranStar was to resume research on the Typhon organisms in order to create various psychotronic devices, including Typhon Neuromods, specialized optogenetic neural modifications that allow humans to possess and use physics-defying abilities like the aliens themselves. Despite the dangers associated with research into the Typhon organisms, TranStar continued its highly unethical research on the organisms, using human test subjects via their Psychotronics Division--in an effort to make a profit off the Neuromods, and at the same time, "redefine what it means to be human."

View from inside the station.

Another shot of outside.

Outside the station concept art.

Concept art of a Talos I desk clock.

Concept art for a booth on board Talos I.

Concept art for the water coolers found on the station. 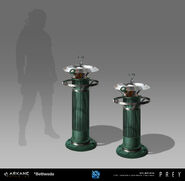 Water fountain concept art.
Add a photo to this gallery

Lobby concept art.
Add a photo to this gallery

Talos I compared to other landmarks.
Add a photo to this gallery
Retrieved from "https://prey.fandom.com/wiki/Talos_I?oldid=19792"
Community content is available under CC-BY-SA unless otherwise noted.