The telepath (Typhon psychocratis) is a hostile Typhon encountered on Talos I during Prey (2017) and on Pytheas moon base during Prey: Mooncrash.

Telepaths are Typhon organisms that serve as mini-bosses in Prey. According to TranStar research, Weavers somehow derive telepaths from Mimics. They casually float through the environment and overpower the minds of anyone unfortunate enough to be in their presence. According to research, the Psychoscope protects against this overpowering ability, which explains why a telepath does not just simply take control of Morgan Yu when encountered as it does with humans that are not wearing psychoscopes.

The humans possessed by telepaths are aware of their enslavement, but are powerless to do anything against it. In addition to commanding a horde of mind-slaves, telepaths can emit homing orbs of psychic energy that deal near-lethal amounts of damage that not only nullify the target's Psi for a very short time, but also blur their vision, and can cause concussions. The Talos I telepaths can also use some kind of short-range psychoshock if approached.

When a telepath seeks to attack a target using a mind-controlled human, or when it simply wants to get rid of one of its slaves, it triggers the slave's head to explode. The explosion can deal damage and have psi-nullifying properties on nearby targets.

When Morgan activates the sprinklers in the Arboretum's greenhouse, the Telepath inside it briefly flees from the greenhouse, implying that the Typhon, at least the Telepaths, are reluctant to be in the presence of water.

The telepaths on the Moon base Pytheas are similar to their Talos I counterparts. However, their connection to their enslaved subjects is more visible, as the mind-controlled humans are linked to the Telepath by purple strings of psionic energy.

Pytheas telepaths also have the distinctive feature of being surrounded by a purple fear-inducing shield apparently powered by their connections with the humans they control. Any attempt to shoot the telepath while it is protected by this energy field will induce fear in the shooter's mind while the telepath will remain unharmed. The energy field only vanishes once all the humans controlled by the telepath are killed or otherwise separated from its influence. The telepath will also not fire its psionic blasts as long as the force field is active, rather relying on its human bombs to attack their targets.

Every time a telepath is killed during Peter's simulations, its corpse will yield a Delay Loop.Time in addition to the usual Typhon body parts.

Like other Typhon, Telepaths are composed of a shifting mass of black tendrils. They are amorphous in shape, with their tendrils hanging down and overlapping each other. A glowing purple-white orb in the front of the Telepath appears to serve as an eye.

If the Telepath has ensnared a large group of Humans to its service, the Humans should be your first target, as they are capable of highly damaging Morgan using a suicide tactic in which their heads explode. Use a Nullwave transmitter, the Stun Gun or a Typhon power to knock them out and then deal with the Telepath. The mind-controlled humans will typically alert you to their presence with cries or screams. The GLOO Cannon is very effective at temporarily disabling them if other, faster options are not available.

Given their habit of floating out of Melee range, use firearms or offensive powers to damage the Telepath, avoiding its PSI dampening blasts and staying on the move to avoid death. If any other humans are in the area and not already mind-controlled by the Telepath, try and disable them somehow to deny the Telepath another running bomb.

If you defeat a Telepath while the humans are still alive and mind-controlled by it, they will fall unconscious. It is currently unknown whether they are able to be revived from this unconscious state. However, a transition note that can appear states that humans that have been freed from Typhon mind-control will eventually wake up and make their way to safety (in-game, they actually stop existing altogether). If you manage to save Rani Chaudhary during her related quest however, she will not fall unconscious and instead go to Cargo Bay B to join up with the security forces there.

If you use Mindjack on Rani Chaudhary, she will pull out a pistol and attack the Telepath with it, before the Telepath regains control of her. Using a nullwave or electrical attack on the Telepath will prevent this happening, and so you can double up with Rani to attack it.

In Prey: Mooncrash, Telepaths are protected with a powerful purple energy field, which render them invulnerable to classic assaults. It is necessary to kill or at least incapacitate all the nearby Mind-Controlled Humans controlled by the Telepath to deactivate this barrier and cause the Telepath to be susceptible to damage. However, a way to get it to drop the shield temporarily is to use a nullwave transmitter. 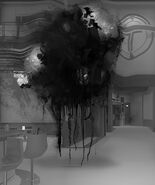