Treasure Hunt is a optional objective in Prey (2017).

Abigail Foy left some kind of treasure hunt for the crew members involved in her tabletop gaming group. If I can find the maps she gave them, it sounds like there could be something worthwhile on the workstation in her quarters.

Zachary’s treasure map is likely the first one you’ll find. It’s on his body right outside the door to Deep Storage in the Arboretum. You loot his corpse at the end of Detour. Hordinbaffle Flagdasterous’ map is an area in the back left corner of the Water Treatment Facility in Life Support. The "3" you are looking for is painted on the wall below the Monitoring Station. You’ll be right nearby during Reboot.

Elias seems to be the only player who came prepared to game night. His treasure map is on the table where the Fatal Fortress session was being played in the Recreation Center in the Crew Quarters. You probably picked up one of Danielle’s voice samples at this same table during Gathering Echoes. Captain Stabfellow’s map leads to a nearby area — the Recycler room over to the left of the Yellow Tulip. There is a very faded "6" on the wall to the left of the Recycler. You’ll be near here during Gathering Echoes and this objective.

You’ll pick up Emma’s treasure map from her body (dead or alive) — she’s one of the mind-controlled humans in the Fitness Center just before you get to the pool. You’ll be here during Gathering Echoes or when you pick up the Danielle Sho optional objective. Rosalyn Swift’s map will lead you to Cargo Bay B. Look for the "5" painted on the wall in the back left of the GUTS Loading Bay. This cargo bay is the primary location for Shipping and Receiving.

Danielle’s treasure map is on her computer in Deep Storage — you’ll be here during Restore From Backup and Ghosting Dahl. Download the map from the Files tab. Melindra Shadowcorner’s map takes you to the Fuel Storage area near the Shuttle Bay. You can get here through G.U.T.S.. There is a "1" painted on the wall just to the right, at the top of the grav lift. This is a weird area — not much of the game leading up to this point has brought you here. You’ll be relatively close during Shipping and Receiving, but you’ll explore the rest of GUTS earlier during Detour.

This special Suit Chipset will give you multiple bonuses - including:

If you enter your randomized combination of the digits 1 3 5 6 before completing all the quest objectives, you will receive a punishment Suit Chipset - Game Master's Ire v1.x Fabrication Plan. This chipset has very different attributes to punish those who thought to cheat with the following "bonuses." If you get the punishment chipset for cheating you will NEVER be able to get the reward chipset: 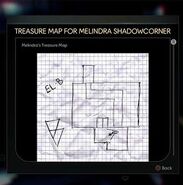