"We all must act according to our nature. No matter what the psychologists and priests say."

Walther Dahl is the recovery team leader on Talos I and appears in Prey (2017).

Dahl was stationed in Earth's orbit. William Yu ordered Dahl to secure all "Cobalt clearance level technology and research" from Talos I and exterminate all human personnel.

Dahl's operatives will appear first at Arboretum when Kaspar intercepts the upload from Morgan Yu to Alex Yu. During The Repo Man, Morgan will then search for Dahl's whereabouts and his partner, Kaspar in the Shuttle Bay before they decide to confront him on Life Support due to his ultimatum by cutting off oxygen on one of three locations (Psychotronics, Cargo Bay or Arboretum).

If Dayo Igwe is saved, he wants Morgan to render Dahl unconscious with a Stun Gun at Life Support, where then Morgan and Igwe will perform surgery on Dahl in the Neuromod Division to remove his memories about receiving William Yu's orders, which will lead Dahl and other survivors on Talos I to escape together in the Shuttle Bay. If Morgan didn't save Igwe and knocked Dahl unconscious, they will confront him again at Arboretum where he is attempting to hack Alex Yu's code (This will also happen if Morgan targets Kaspar first and destroys or hacks it, rather than go to Life Support to confront Dahl). Morgan can either knock him unconscious again or kill him. As long as Dahl and Igwe survive, the escape option through Shuttle Bay will be available but if one of them dies prior to the neurotomy procedure, the escape through Shuttle Bay will not be available.

If Morgan has been killing other station personnel, upon Dahl's arrival, the two can strike a deal. Dahl proposes that if Morgan will kill the remaining station staff, he will take Morgan back to Earth safely afterward. He will be much friendlier towards Morgan as a result, often commending them on their "initiative" to take out the station's staff and "making my job easier."

After Morgan completes the objective, Dahl will ask them to come to the shuttle bay so that they can leave. Upon entering the bay, Morgan finds a series of friendly Military Operators hovering around the area. Dahl then reveals he was lying about saving Morgan, and orders the Operators to attack. Morgan is forced to engage all Operators, as well as Dahl.

Dahl's expertise in electronic combat and infiltration paired with ruthless pragmatism makes him an ideal asset for solving intractable problems. Dahl prefers the company of Operators who do not question orders. His marksmanship is such that he is capable of killing a tangentially sprinting Morgan with one shot from his unmodified pistol, regardless of the latter's suit integrity or health. 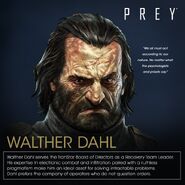 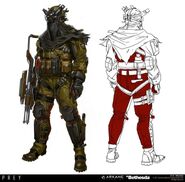 Ditto
Add a photo to this gallery
Retrieved from "https://prey.fandom.com/wiki/Walther_Dahl?oldid=19107"
Community content is available under CC-BY-SA unless otherwise noted.